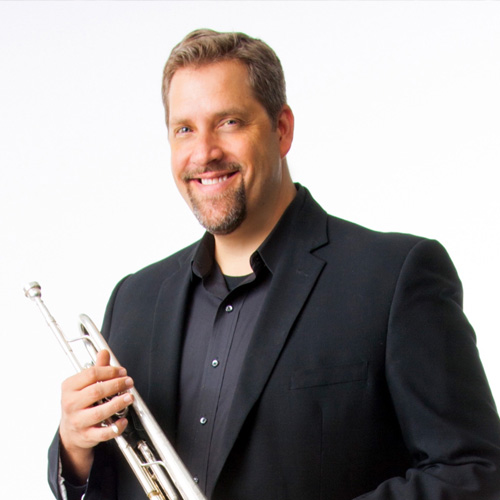 Praised as “one of the finest trumpeters of his generation,” John Marchiando currently serves
as Associate Professor at the University of New Mexico. Additionally, he performs as Principal
Trumpet with the New Mexico Philharmonic, Trumpeter in the Summit Brass, Enchantment
Brass Quintet, Tromba Mundi, and MarchianDUO, a trumpet duo with his wife, Brynn
Marchiando.

Marchiando appeared as Principal Trumpet with the New Mexico Symphony Orchestra from
2006 until it’s untimely demise in 2011, and has also held positions with the Phoenix Symphony
and Arizona Opera. He has performed as Guest Principal Trumpet with the Tucson Symphony
Orchestra and Santa Fe Symphony, and has appeared with many other notable ensembles,
such as the Santa Fe Opera, Colorado Symphony Orchestra, Fountain City Brass Band, Santa
Fe Chamber Music, Chatter 20-21, Santa Fe New Music, and the Figueroa Music and Arts
Project.

A committed music educator, Marchiando has given master classes and clinics worldwide,
including at renowned institutions such as the National Trumpet Competition, International
Trumpet Guild Conference, Rafael Méndez Brass Institute, College-Conservatory of Music
(CCM), University of Illinois, University of Colorado, Royal Northern College of Music (UK),
Messiah College, Oklahoma State University, and many more. He has served as adjudicator for
the National Trumpet Competition, International Trumpet Guild Solo Competition,
International Women’s Brass Conference Solo Competition, and for state competitions and
festivals in New Mexico and Arizona. John also appears regularly as a clinician at high schools
across the southwest. Previously, Dr. Marchiando held positions on the faculties of the
University of Toledo and Arizona State University.

“The standards and work ethic instilled in me as a member of Dr. Marchiando’s studio at UNM
allowed me to thrive as a musician in the United States Army and beyond . John’s consummate
musicianship, beautiful sound, and meticulous attention to detail will forever influence my
playing and teaching. His passion for his students and the trumpet are truly contagious and are
a continuous source of inspiration.”

Marchiando can be heard on recordings on the Accord, Centaur, Summit and Stemming record
labels and he has done projects for National Public Radio and the Public Broadcasting System.
John’s most recent recording, A Brass Menagerie: The Music of John Cheetham, with the
Enchantment Brass, was released in September 2017, and is available on all digital media
outlets. His solo recording, Arrows of Time, with the University of New Mexico Wind Symphony,
includes premier recordings for solo trumpet and band by James Stephenson and Joseph
Turrin. He has recorded three albums with Tromba Mundi, and has also recorded as a member
of Summit Brass. As a music producer, John has worked on several ventures for the Summit

Dr. Marchiando has been extremely fortunate to study with some of the greatest trumpet
virtuosi in the world, including David Hickman, Armando Ghitalla, Charles Daval, Raymond
Mase, Chris Gekker and Ramon Parcells.