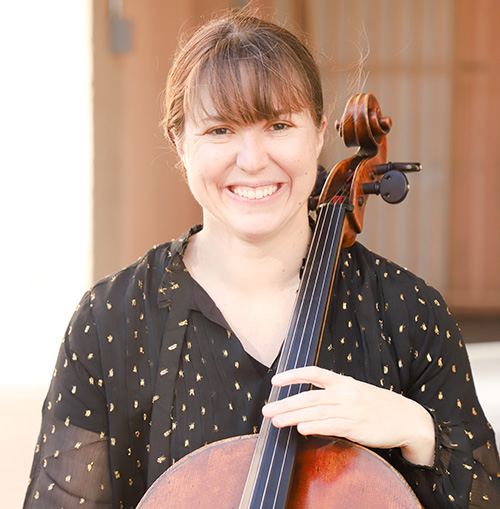 Cellist Amy Huzjak lives in Albuquerque, NM and serves as Principal Cellist of the New Mexico Philharmonic. She also freelances throughout New Mexico and West Texas, and collaborates with other area organizations including Chatter ABQ, Opera Southwest, and the Santa Fe Symphony and Chorus. She is a founding member of Chasqui Quartet, touring Colorado in August 2021 and the Midwest in Summer 2022.

Recent solo appearances include Shostakovich Cello Concerto No. 1 with the Midland-Odessa Symphony and Abilene Christian University Orchestra, the Adagio from the Dvorak Cello Concerto and Haydn C Major Concerto with the University of Texas-Permian Basin (UTPB) Philharmonic as well as duo recitals in Midland, Abilene, San Angelo, Dallas, and Levelland, Texas.

Previously, Amy played with the Abilene Philharmonic and served as the Principal Cellist of the Midland-Odessa Symphony and Chorale (MOSC) for over a decade. An avid chamber musician, Amy was the cellist for the MOSC resident ensemble Permian Basin String Quartet (PBSQ) during her tenure as Principal Cellist, performing concerts and educational outreach throughout West Texas.

Before moving to Texas, Amy was the Principal Cellist of the Huntington (WV) Symphony Orchestra and played with several D.C area orchestras including the Fairfax (VA) Symphony Orchestra, Apollo Chamber Orchestra (MD), and the Prince William (VA) Symphony. She was a faculty member at the International School of Music in Bethesda, MD and had a private studio in College Park, MD.

A committed educator, Amy is a member of the Suzuki Association of the Americas and has a studio of over 20 students. In addition, Amy is an Adjunct instructor at University of New Mexico coaching string quartets, directing the UNM Sinfonia, and teaching cello lessons. She is sought after as a clinician and coach for high school orchestras and chamber programs in New Mexico and West Texas. Previous posts include Adjunct Professor at University of Texas-Permian Basin, Angelo State University, Abilene Christian University, Hardin-Simmons University, Midland College, and Odessa College.

When not playing, Amy loves hiking and skiing in her native Colorado and travels around the world to hike with her dad. She is looking forward to exploring the Sandias and skiing in New Mexico.